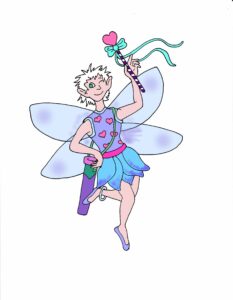 for: THE SUGARPLUM TREE

One tree in the evergreen forest was different. Its leaves changed color in late summer; they dried and dropped to the ground in the fall. The tree was unhappy because children only wanted to play beneath the evergreen trees. Most of the kids ignored the leafless tree and skipped and jumped around the evergreens. On warm weekend days, children brought their lunches and sat under the evergreens, hunted for cones under the pine trees, and carried them back home to make holiday decorations. Even the snow that fell on the brown tree hung in clumps and the winter sun highlighted the scars of the leafless tree. The tree was sad and remembered its happier times when it had big green leaves. One cold night, the Sugarplum Fairy looked down and spotted the bare brown tree among the evergreens. She flew down and asked the tree why it was so sad and the tree said it was old and ugly. The Sugarplum Fairy felt the sadness of the tree and wondered how she could give it some happiness. What does she do to make the tree feel proud?

The Sugarplum Tree by Andrea Antico is a delightful storybook that not only captures winter fun but also encourages readers to think positively and indulge in kind deeds. It is an enchanting and magical story of kindness and helping others and will bring a smile to the faces of young readers to see the leafless brown tree sprouting something magical for the holidays. Virginia L. Small’s colorful illustrations add to the magic of the story and capture the essence of the winter season beautifully and make it tangible for readers. It is a good storybook to gift children for Christmas and can be used for storytelling sessions in classrooms and homes, especially during winter.

“The Sugarplum Tree reminds us that our differences are what makes us special. Andrea Antico’s heartwarming story and Virginia Small’s charming illustrations shine light on the importance of being kind to each other. Everyone has adversity of some type to deal with and making an effort to care about and give to others who need some help can make all the “difference” in their world.”

Capturing the magic of a classic children’s story about a sugarplum fairy, Andrea Antico sets the stage for an imaginative winter narrative about a bare deciduous tree living in the middle of an evergreen forest.

Neglected and even abused by children who come to play and picnic in the forest, the tree rues the loss of its vibrant summer self.  The legendary fairy discovers it drooping amidst the forest greenery and voila! with her wand, transforms it into a sugarplum tree.

Charming illustrations make vivid the elements of Antico’s story; initial disdain for ugliness (the poor tree), recognition of hidden value (discovering beauty in the tree once it was decorated), and the heartwarming benefits of kindness (the ultimate fun around the tree, then its spillover goodness to family and friends).

Young readers see without being told in so many words the rewards of inclusion.  It’s a skillfully executed lesson in humanity, one created by an elementary school teacher and librarian who knows kids–and whose grasp of young children’s capacities is obvious.

She has added the bonus of concrete suggestions for teachers (and presumably parents) to enhance the reading of telling of the book.  And Virginia Small’s delightful, sometimes surprising illustrations add fillip to her work.

The SUGARPLUM TREE would be a worthy addition to offerings in libraries and schools, as well as a fun, engaging hold for families with young children where bedtime stories and quiet-time story hour would welcome the addition.

by Carol Ehrlich, award-winning poetess and member of the National League of American Pen Women

for:  BUSTER THE BULLY 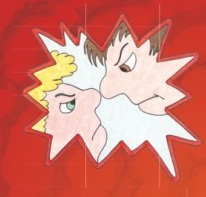 “This book has beautiful illustrations that are very appealing to children.”  George Bodley

“Bullying is a very real and damaging behavior among young people. It is a topic of much concern and this story addresses it in a way to which children can relate.”  Alene Carlson, retired school principal

Buster is a kid who moved to a new school.  The school was great until Buster came and started to yell orders and be mean.  He lied to his teachers, he threw trash and gum.

One day a huge tornado came rushing toward the school building.  The principal gave an emergency warning that all students must stay in their room for safety.  Buster did not listen to the principal and ran down the hall, knocking over a teacher.  She caught him and made him go back to the room and sit by the wall.

Buster did not know about tornados but was very scared when he looked outside and saw the big twister coming.  A bright young boy sitting next to him told him all about tornados and what terrible damage they can do.

The tornado made Buster so afraid that his life changed after the storm.  He started to be good and do all of his homework.  He was nice to the students and was never ever mean again.

The author is trying to say that you should not be a bully and bad.  I believe that the author wrote this book because she did not want to tolerate bullies being mean to other students and not paying attention to the teachers and the principal.

One time at school, a bully like Buster punched me in the face.  I reported him to the teacher.  Then, ten days later, my friends and I punched him back.  He was never heard from again.  Maybe he read this book and moved to another school to start over as a better kid.

I think seven to eight-year-olds should read this book to learn about bullies and tornados.

The setting of this book takes place in a great neighborhood, where there was a great school.  The students were happy until Buster the Bully arrived on the scene.

Buster was mean to his classmates, lied to his teachers, swore, and made rude gestures.

One day when a tornado was headed toward the school, the principal gave an emergency announcement that all students must stay in their classrooms.  Buster disobeyed the principal’s orders, walked out of class, and ran into a teacher.

The teacher made Buster go back to class as the tornado came closer to the school.  Buster got really scared while sitting in a classroom corner near a good, smart kid who tells him that a tornado is definitely something to be afraid of and that he absolutely must follow safety directions.

This big scare was enough to make Buster change his ways, to decide that bullying is wrong, and to know that anyone can decide to be a better person.

I know someone who is mean to kids, swears, and uses improper body language. He beat up a kid and that kid got really hurt and mad at him.  That bully got suspended for four days and he could only be at school for half the day.  Maybe he could have changed his ways if he had had the opportunity to read and study BUSTER THE BULLY.

This is a good book for kids 7-10 years of age who are bullies or who might be bullied someday.  I would like to meet the author of BUSTER THE BULLY because it would be interesting to talk about the book and how she thought of the idea.